Campaigners are accusing the ASA of bias towards the advertising industry, as this latest ruling follows several recent refusals to act on irresponsible ads

“How bad does an ad have to be before they will take action?”

In the latest of a string of failures to regulate irresponsible advertising, the Advertising Standards Authority (ASA) has gone against the advice of its own experts as a ruling released today states the regulator’s intent not to take action against an ad by Jaguar Land Rover. Campaigners from Adfree Cities and Badvertising are calling for an overhaul of the ASA’s structure and funding, accusing the regulator of neglecting its responsibility to prevent misleading ads that risk worsening the climate crisis.

Land Rover’s ad, which shows a mud-spattered Defender in a forest with the tagline ‘Life is so much better without restrictions’, received 96 complaints from members of the public concerned about its reckless promotion of restriction-free driving in ecologically sensitive areas.

Many of the complaints also argued that it was irresponsible of Land Rover to undermine driving and vehicle restrictions which are in the interest of public and environmental safety, while selling a large, heavy SUV whose levels of pollution are 250% above EU targets for an average car. A large majority, 74%, of SUVs are registered to urban addresses, where they contribute to congestion and dangerous levels of air pollution. Nevertheless, despite recently turning its logo green for COP26 and stating an aim to improve the regulation of environmental issues in advertising, the ASA Council has gone against the advice of its own expert panel to let Land Rover off the hook.

“They have fallen at the first hurdle after the most important climate conference in a generation.”

Failing to act on harmful ads

This isn’t the first time the ASA has failed to act on ads that endanger social and environmental safety. This latest ruling is the latest in a string of evasions and poor decisions as the ASA fails to regulate misleading and irresponsible adverts that have even seen the advertiser taken to court in other countries.

In February 2021, Adfree Cities released a report revealing that only 22% of adverts complained about to the ASA are investigated, while only 2% of complaints are upheld. Here are some recent examples that show the urgent need for an overhaul of the regulatory body, which is demonstrably not fit for purpose:

1. Chevron’s “protect the home we love”:

A video promoting the second biggest polluter in the world, oil company Chevron, received tens of complaints from UK citizens over its abject greenwash and wokewash. This ad, which was created by agency Wavemaker, forms part of a legal complaint against Chevron’s consistent use of misinformation, submitted by Global Witness, Earthworks and Greenpeace USA in February 2021. Despite the dangerously misleading ad appearing in the UK, the ASA said it wasn’t able to take action – instead, complainants were directed to the regulator in the USA. 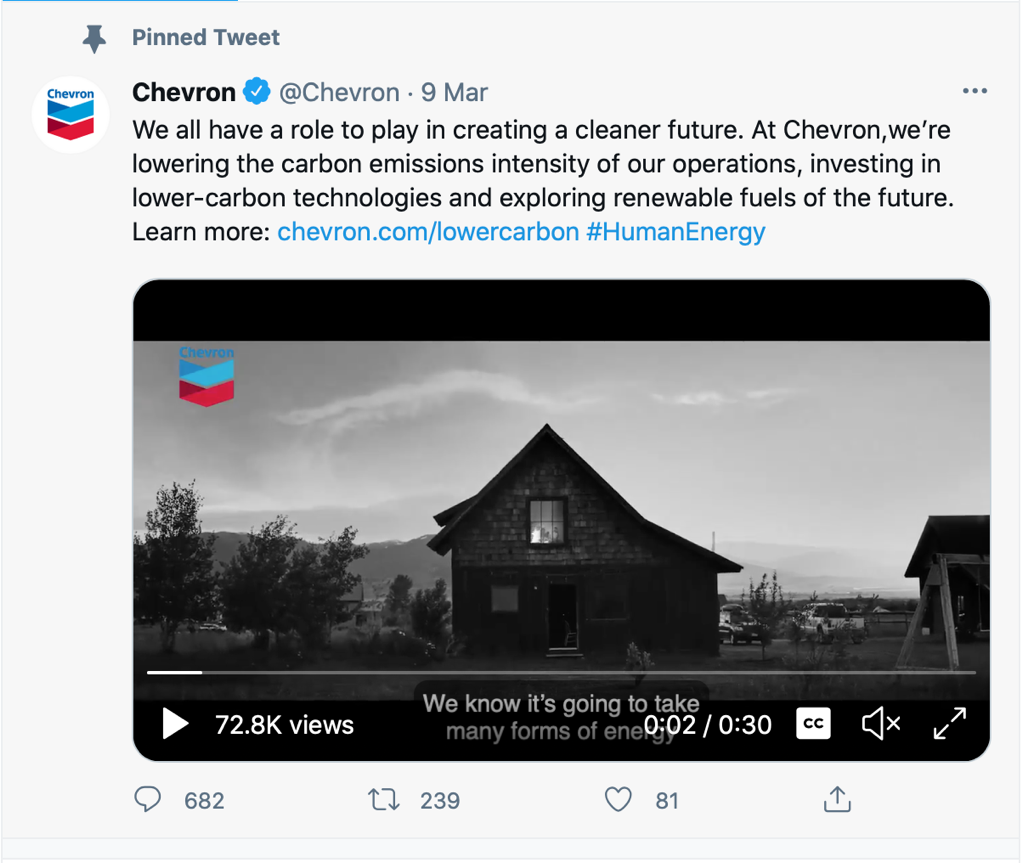 2. Qatar Airways’ pitchside greenwash: Pitchside adverts with the tagline “Qatar Airways: Fly Greener” rolled around Wembley stadium during the 2021 European Football Championships. Following multiple complaints about the ad’s unfounded greenwashing for this intensely polluting airline, the ASA dodged responsibility by redirecting complainants to Ofcom – who then told complainants to go back to the ASA.

3. EasyJet’s COP26 fairytales: Europe’s biggest airline strategically placed a series of greenwashing ads in the run up to the 2021 COP26 climate summit. The ads, created by agency VCCP, displayed headlines like “Destination Zero Emissions”, while conveniently failing to mention material information… like that the concept of zero emissions flights relies on unproven technology that is not predicted to be viable until 2035 at the earliest – a timeframe even EasyJet has said is “ambitious”.

Despite EasyJet’s clear objective to sell current, carbon-intense flights to climate conscious citizens by using pro-environmental messaging – the webpage linked to in the ads is headed by a booking form – the ASA refused to investigate the ad. In this case, the regulator gave the dubious reason that since the ASA is starting a project focusing on how to regulate environmental claims in sectors including travel, it made it inappropriate to engage in a routine investigation into this particular ad.

4. HSBC – world’s 13th most polluting bank pretends to be green – will the ASA act?: Our complaint against HSBC’s greenwash by omission in the run up to COP26 is currently under investigation by the ASA. By the time this lengthy process is complete, whether or not the ASA decides to take action, the ad campaign is likely to be over… and HSBC’s ad agency Wunderman Thompson will be finding a new way to launder the bank’s reputation.

“Too slow, too reluctant to investigate and lacking any enforcement teeth if they do, the advertising industry’s system of ‘self-regulation’ is not fit for purpose. In the run up to the COP26 climate talks, the ASA turned its tick from red to green. But they continually lack any sense of urgency to address advertising’s role in the climate crisis. It’s business-as-usual.”

“The ASA Council has made an overly narrow assessment of this Land Rover advert and failed to see it in a wider picture of a worsening climate crisis, rising urban ownership of SUVs and lethal increases in air pollution. Business-as-usual continues.”

“Ultimately, we need a tobacco-style ban from central government on advertising for high carbon products such as SUVs, airlines and fossil fuel companies.”

“The ASA claims that its tick of approval has gone green, but on the evidence of their current failures to regulate climate-damaging adverts, a smoking tailpipe or jet engine would seem a more appropriate symbol.  Given the regulator’s weak track record, the question is, how bad does an ad have to be before they will take action?”

“Not only are they funded by, and very close to the industry they are meant to be regulating, but like an insurance company reluctant to pay out, seem to put most of their energy into finding ever more creative reasons not to act, rather than doing what they were set up to do. The ASA’s lack of urgency demonstrates that in spite of their public statements on the environment, they have neither grasped the severity and immediacy of the problem, nor found ways to put their green rhetoric into policy practice. They have fallen at the first hurdle after the most important climate conference in a generation.”

Along with the New Weather Institute, Adfree Cities are calling for an overhaul of the structure and funding of the ASA to show less bias towards advertising industry interests. We also propose that the UK government create a tobacco-style ban on advertising for high carbon products such as cars, SUVs, airlines and fossil fuel companies, as the harm caused by these products to public health and the environment cannot justify their continued mass-marketing; particularly when marketers can escape any meaningful regulation under the current system.

View all posts by Veronica