In its short period of existence, the community groups, residents and artists that form Adblock Bristol are already notching up some significant victories. Two new proposals for more outdoor advertising panels in Bristol have been stopped. 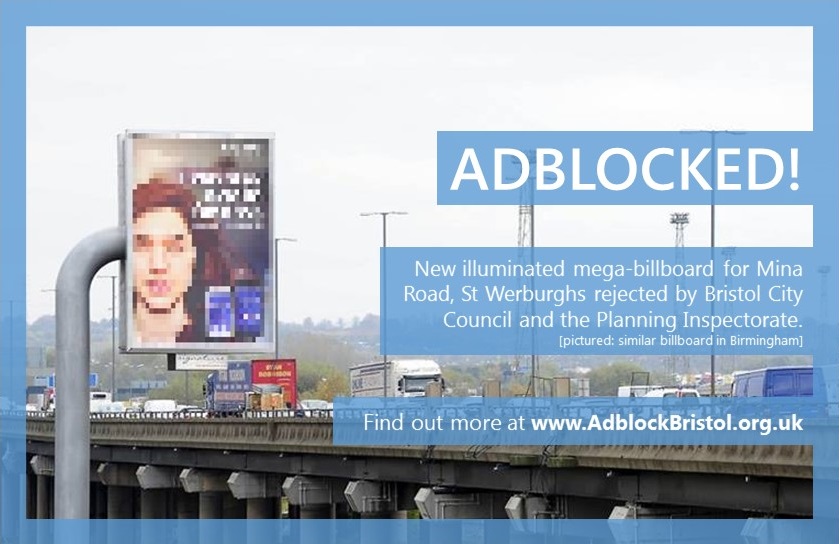 
The first was a proposal for a new digital billboard on Mina Road, St Werburghs facing the M32. The huge, flashing digital billboard would have proposed a significant danger to motorway traffic as well as adding to the billboard blight for St Werburgh residents who already have 8 billboards in their neighbourhood. The planning application received 64 letters of objections and was duly rejected by Bristol City Council’s planning process.

Disrespecting the views of the both local residents and the Council, the company ‘Insite Poster Properties’ appealed the decision to the Planning Inspectorate in London in June 2017. The Inspectorate upheld Bristol City Council’s view and rejected the application too stating that the billboard would negatively affect the visual amenity of the area and pose a significant risk to motorists. Read the Inspectorate’s report here.

The company then submitted a revised application for a slightly smaller board – and this was also rejected by Bristol City Council.

More recently, an application for 10 ‘Europay’ panels were rejected by Bristol City Council. In an era where many, if not most people, have mobile phones, these over-sized units are corporate advertising space masquerading as a useful public service. On 4 September 2017 Bristol Council rejected the applications stating that:

[The proposals] “would appear as excessive visual clutter in the streetscene. It would fail to preserve and enhance the character of the conservation area.”

Both cases show how by coming together to articulate our voice, Bristol residents can push back the tide of outdoor adveritising encroaching on our neighbourhoods.  Check out our guide to objecting to planning applications here.

Follow @AdblockBristol for more updates and come along to the next event.

View all posts by Systems